Here at Clarifai, we love innovative, impactful hacks. Over the years, developers have used our technology to build some impressive ones, like Spectrum Navigator, the GPS app that allows for visually-oriented navigation for the autistic community (built by Austin Lubetkin, a Clarifai captain!) and GSTR, the web-based app that helps bridge the gap in non-verbal communication. This week, we’ll learn about another cool hack with profound goals. Named as the People’s Choice winner at the NASA Space Hacks Hackathon in 2017, Terrabeasts is a mobile game that encourages gamers to eat “greener” food using cute digital alien pets, that users can help grow by snapping a photo of the food they eat to “feed” them. Users get to watch their Terrabeast evolve depending on the carbon footprint of that meal! 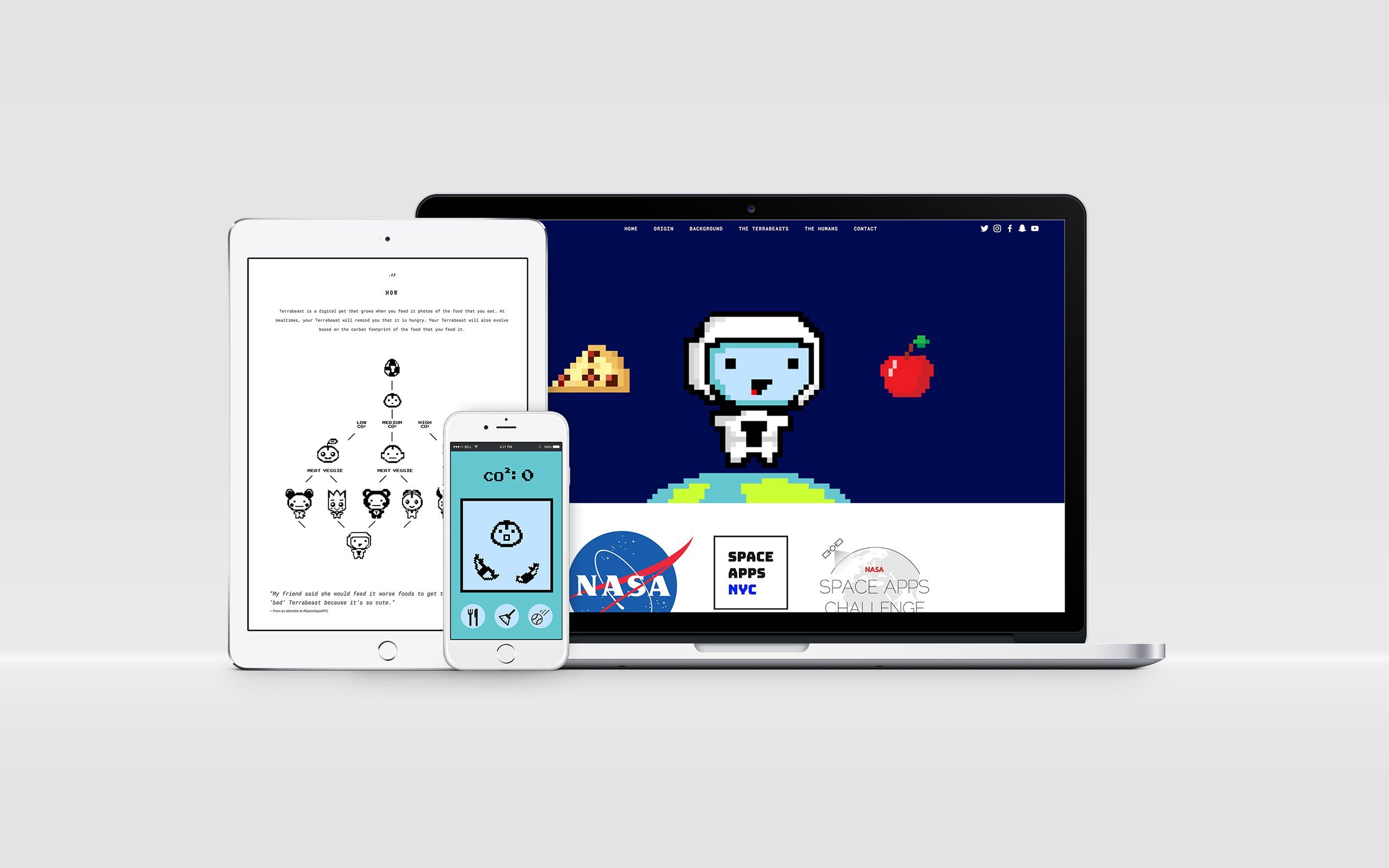 Two years on, the world continues to grapple with global warming and climate change, making this game more relevant as ever. Below we hear from the team behind Terrabeasts:

1) Tell us about yourselves! How did you guys end up working together?

I work as a senior software engineer. I was working at Zocdoc, but now I am about to start at a company called Compass looking to change the real estate brokerage world with technology.

I work as a Senior Software Engineer at Jet.com.

Currently, I'm a strategist at frog design focused on using design research to build human-centered products and services. In plain speak, I like talking to people, learning about their problems, and then trying to solve them.

And last but not least, Tim Shin, who is also a software engineer.

We met at the NASA Space Hacks Hackathon in 2017. We all have a passion for 'making' and hacking, so it was fun to meet and make something together. We also had a good mix of skills and that complementary support helped us divide up the work and come up with a really fun idea.

2) Can you give us a quick summary of how Terrabeasts works and what inspired the game?

We wanted to address one of the themes in the 2017 NASA Space Apps challenge, “What’s for Dinner,” in a fun, engaging way that could encourage people to make better ecological decisions with their eating habits using gamification. Global warming is one of the biggest problems we face today, and the carbon footprint of food can be used to measure the level of pollution. So, we decided to introduce more entertaining elements to our design. How about some cute aliens visiting the Earth and trying to adapt to our environment and food?

We had a lot of fun ideating and brainstorming together at a whiteboard. We did consider making other games though and considered a few (that we may still make in the future), including one where grandma's house is at risk of flooding due to global warming and another game where humans explore interstellar travel to another planet. Ultimately though, we decided to go with Terrabeasts due to the powerful backend piece that Clarifai could bring through image recognition.

Clarifai was critical in our application to offer a more seamless experience. Using its computer vision technology, we could let the players take a picture of their food and letting the AI analyze and recognize the product instead of engaging players in the tedious and 'un-fun' task logging the items like a journal.

3) Which Clarifai API did you use to build Terrabeasts, and how did you integrate our API with the app?

Clarifai Predict. We integrated it in a way that the user would take a picture of food which would be used by the API to identify what type of food it was. Once identified, the food was checked against a table to see it's carbon-footprint to produce.

4) What did you like about working with Clarifai's tech (e.g., ease of use, accuracy?)

Alex: I loved its out-of-box nature. Having started studied a little about neural networks since the project, I see that Clarifai has done a lot of work at creating and training models (for food in our case) without which, making concepts like this one much more time-consuming.

Skanda: Its lack of issues. A lot of products require messing about with many many tools to get up and running. Considering our domain space was very different from the general use case of the hackathon, it was great not to run into any major setup issues.

5) Anything else you’d like to say on behalf of the team? (Is it still available to download and play?)

Overall, we would like to continue to develop the Terrabeasts game through an app that is integrated with social media (because people are already taking photos of their meals on Instagram) and also explore the potential of a wearable app for fitness. We believe there is value to having a Terrabeast on your wrist that goes on runs and exercises with you and evolves based on healthy habits you're developing that are good for both you and the planet.

Thank you for the opportunity to share Terrabeasts with the Clarifai community, and thank you for building an API to help us make it happen!

You can find out more about Terrabeasts here!