Harnessing AI for Good: The Promise of Facial Recognition

For many of us, there are few things more important to our identity than our faces. It is often the first thing people notice about us and integral to our ability to communicate with others. Most of all, it is one of the most significant things that make us unique from other human beings.

With all this in mind, it’s no wonder why facial recognition is one of the most notable areas of computer vision AI. Previously, we broke down how this complex artificial intelligence works, but it’s a technology most people have already encountered. Whether it’s tagging loved ones in pictures on our social media accounts, unlocking our smartphones or organizing our photo libraries, facial recognition has already made our everyday lives simpler. Still, its value goes well beyond these ordinary occurrences.

Today, I’ll be highlighting some of the ways this technology is proving itself to be a potential lifesaver.

1. Better communication between patients and caregivers

Facial expressions are a vital means of communication for most human beings, but in health care, they can be a matter of life or death. 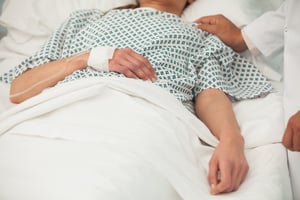 With this in mind, the Robotics, Health, and Communication Lab at the University of Notre Dame have used facial recognition technology to develop “Next-Generation Patient Simulators.” Having been trained on 3D images of persons who have suffered from several neurological conditions, like strokes, or who are in pain, these “high-fidelity robotic human patient simulators” can mimic clinically-relevant facial expressions. This training tool can help doctors to learn and quickly recognize sudden, fleeting changes in facial expressions without patients having to verbalize their symptoms.

Working with non-verbal mentally and physically disabled patients, one music therapist knew many of them struggled to express their emotions on their faces. Using the advances in facial recognition, Greg Hanford built a facial analysis tool that can read the expressions of these patients, compare them to data taken during previous sessions, then translate any changes into understanding how the patient feels emotionally. With his tool, he has been able to gauge the impact music therapy is having on his patients, who would otherwise be unable to express themselves. As Greg notes, the software is still in its infancy, but he hopes that in time other music therapists will be able to use the tool to see if their efforts are helping their patients.

Since ancient times, natural disasters have wreaked havoc and devastation on the world, leaving innumerable people displaced and injured in their wake. Reuniting families is an integral part of disaster relief efforts, but this is often very difficult particularly where victims have suffered from injuries to the face. With the advances made in facial recognition, however, there is now a potential aid in this process.

In 2017, the “Disaster Medicine and Public Health Preparedness” journal published a research article where commercially available facial recognition software was tested to perform this task. Pictures were taken of over 100 volunteers before and after mock facial injuries were applied, and analyzed, along with the volunteers’ personal photos, to see if the technology could accurately identify a person with facial injuries. The results showed that where images were of optimal quality, the software was able to identify the volunteers over 90% of the time. Even with lower quality images, the software was able to accurately identify volunteers almost half the time, which could be of significant benefit for relief workers who need to identify hundreds or thousands of victims.

Should a missing person be found in an image, a notification is sent to the profile. Unfortunately, the success of this particular initiative is dependent on whether images of missing people are posted to Facebook. That said, when there are pictures of missing people who need to be identified, independent facial recognition systems have been shown to be invaluable tools for law enforcement.

This past April, police authorities in New Delhi, India launched a trial of a custom facial recognition system. Using a database provided by the country’s Ministry of Women and Child Development, the software matched the facial features of 45000 children living in care homes against the stored images. Within 4 days, the police were able to identify almost 3000 missing children and start the process of reuniting them with their families. Should the system continue to perform at that rate, authorities could identify over 20,000 missing children a month, giving hope to suffering families across the country and world.

Having developed facial perception in infancy, most of us don’t give much thought to the amount of information gained and shared through faces alone. Human beings can recognize and recall thousands of faces and gain insight from almost all of them. Like visual recognition, facial recognition is a tool that can augment these abilities. By going through thousands of faces far quicker than we would be able to, computers give us back an invaluable amount of time, and for the use-cases like those outlined here, time is of the essence.